In addition to the productions during the academic year, Summer Theatre (formally known as Summer Showcase) is a self-support program featuring musicals and strait plays that are popular with audiences. For over 40 years productions have taken place in our  indoor air conditioned theater as well as outside in our comfortable amphitheatre on the Diane C. Hoch Stage where you can enjoy  the show under the stars on a warm summer night.  Community members are encouraged to audition for these productions and join us in a summer of fun.

Unfortunately, due to COVID-19, the 2020 Summer Theatre has been canceled. Please check back later for updates. 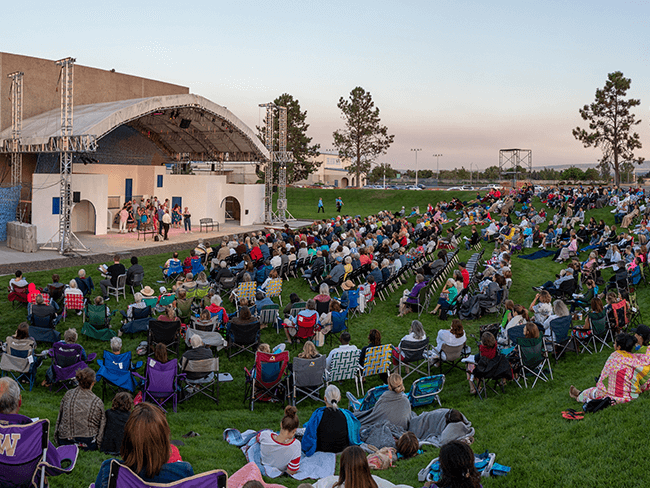 2016 Fiddler on the Roof and Musical of Musicals – The Musical

2010 Rent and The Drowsy Chaperone

The Columbia Basin College summer program started as a joint effort with the Tri-Cities Water Follies Association in 1966 to enhance and expand summer cultural activities for the community.  Known then as the CBC Summer Players, the productions, under the direction of CBC instructor Dan Sarton, were presented outdoors at Columbia Park and featured turn-of-the-century melodramas with the regular villain, hero, and happy endings.

When the CBC Performing Arts Center was completed in 1971, the Performing Arts program was placed under the direction of Ted Neth and the productions moved indoors.  One of the first shows to be produced in the new theatre was A Little Night Music, directed by Art Fuller with music direction by Don Paul. In addition to performances in the theatre, the summer of ‘73 saw the introduction of the first-ever Tri-Cities dinner theatre, which was offered for three years.

The first official Summer Showcase was introduced in 1983 by the Performing Arts Division, and was expanded to include two theatre productions (usually one musical and one comedy), art gallery exhibitions, and a variety of performances by the Columbia Basin Concert Band.

In 1987, the Summer Showcase musicals moved outdoors with Ginny Quinley becoming the resident outdoor production director.  Being outdoors does bring on challenges from Mother Nature, strong winds in 1991 which blew down the set of Paint Your Wagon and rains came for the 1992 production of Music Man.  The rest of the 90s brought well attended shows such a Oliver!, Guys and Dolls, Annie Get Your Gun, Jesus Christ Superstar and Grease.  Ted Neth retired and we received a new Dean, Bill McKay a tireless advocator of the arts.

The 2000s saw many changes, from going back inside because our outdoor stage was in disrepair to the concerts and exhibits taking the summer off leading us to change the name to just Summer Theatre.  This did not stop us from producing some very entertaining shows for the Tri-Cities community including Annie, West Side Story, Wizard of Oz, Oklahoma, Jekyll & Hide, A Chorus Line and Rent.

In 2016, with a kind donation from an arts supporter, we were able to construct a covered stage to be able to offer shows outside again.  The Diane C. Hoch stage has now had many well attended productions performed on her such as Fiddler on the Roof, Rock of Ages and Mamma Mia!

Stay tuned, as there is more history in the making!